Right now we’re in the middle of sale season, having just come off of Cyber Monday and soon enough Boxing Day (for us Canadians) will be upon us and we’ll be seeing lots of deals for lots of different digital audio equipment. One place where you’ll see the deepest discounts is the plugin market.

VSTs (virtual studio technologies) for Windows and Audio Units for Macs are, for the uninitiated, ways third party developers can create software that run in DAWs (digital audio workstations), allowing expanded capabilities. These run the gamut from EQs and compressors, which we’re all familiar with now, to synthesizers, delays, reverbs, and all sorts of interesting effects and instruments. However, there’s a type of plugin that I keep seeing recommended around the internet that I would strongly encourage podcasters to avoid, boutique plugins.

Now, when I say “boutique plugins”, I mean plugins that generally are emulating analog equipment, and charge a premium to cover the research, development and licensing costs. Oftentimes they are accompanied by very persuasive marketing that touts the depth and clarity these plugins add to a mix by authentically modelling hardware used on countless hit records. To prove this, they will have a celebrated mixing engineer show off the plugin in action in a variety of different scenarios. You’re left with the impression that the developers have captured the essence of the original hardware, with its tube valves and warm harmonics and good vibes from knowing you’re recording the same way the Beatles did.

And, by and large, these plugins do exactly what they say. The teams over at Waves, UAD, Slate and the like do a great job modelling hardware units and emulating their sound in the world of digital audio.They can command such steep prices because audio mixing is a lucrative business and authentic replicas of famous equipment that cost tens of thousands of dollars is a bargain, comparatively. The reason I don’t recommend these plugins for podcasters, however, is that while they emulate equipment very well, they don’t meet the needs of most podcasters at all. Let’s dive into some of the reasons why.

The first, and most important reason why boutique plugins are not made for podcasters is that they’re emulators of hardware that oftentimes were designed 30+ years ago. This means they are 30 years removed from advances in technology, design and aesthetics. Take EQs for example. Nowadays we’re used to having a real time spectrogram of the audio running through our EQ curve, and being able to make as many points as necessary to shape the sound and do it rather intuitively. You may not know what every parameter is, but there is a visual representation of what it is doing to the audio that adjusts in real time and you can generally grasp that clicking and dragging points up accentuates an area, while dragging them down attenuates it. Through years of trial and error, we’ve landed on a design that is fairly intuitive. 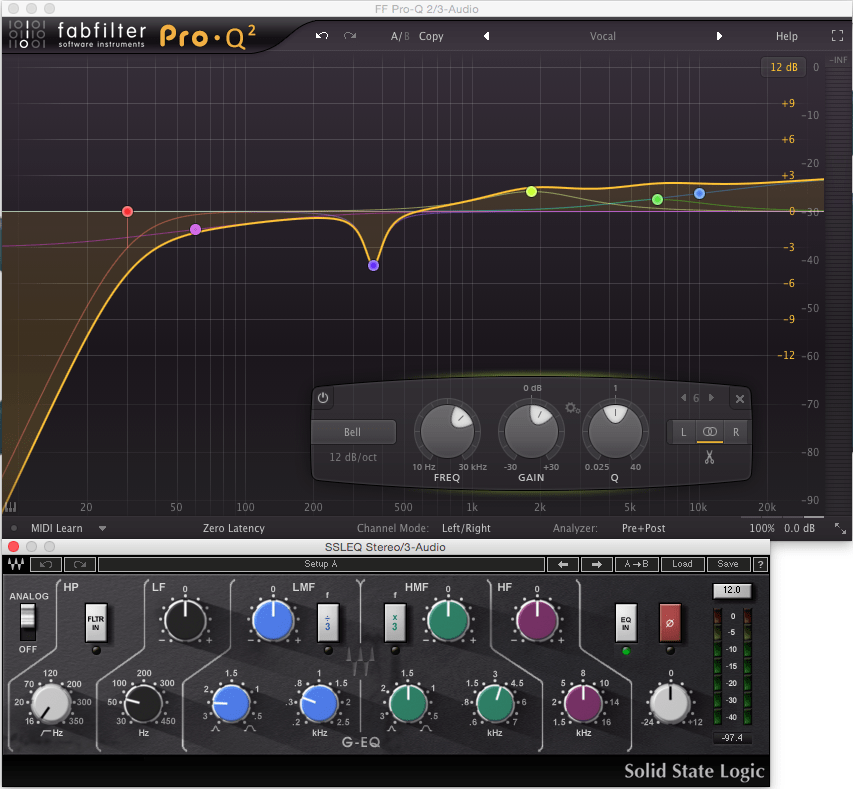 Two great EQs with very different uses. While the Waves SSL EQ (below), can be great for very specific use cases, the Fabfilter Pro-Q 2 (above) can be used in any situation that calls for an EQ. And it looks a little more user friendly.

Boutique plugins, on the other hand, are beholden to the control schemes they’re emulating, which could date back to as early as the 60s. For EQs, this typically means up to 5 points of articulation, no visual feedback and very limited curves. You’d never be able to use the EQ curve we have in our guide to podcast editing for example, which has 7 overlapping curves.

Essentially what I’m trying to say is that that boutique plugins are normally not very versatile. Due to the nature of podcasting, what with its out of sync files, noisy recording environments, mics of questionable integrity et al., it’s good to have easy-to-use, swiss army knife plugins that can handle any situation. This is one of the reasons why we decided to recommend Reaper in our guide to editing. All of the built in plugins are made with maximum usability in mind. The GUIs aren’t always the prettiest, but the gates have hysteresis, everything has lookahead functionality, and you can easily replicate most of the functions of boutique plugins without the next thing I’m going to take issue with: harmonics and noise.

See, the main selling point of many of these boutique plugins is the “character” they impart to the audio. This “character” typically boils down to added harmonic distortion and noise. Harmonic distortion is basically enhancement of resonant frequencies and come in two flavours, even and odd. To oversimplify things, even harmonics accentuate octaves of the original sound, giving it a “warmer” tone, while odd harmonics accentuate frequencies in between octaves, producing mild amounts of dissonance and thus distortion. All analog equipment imparts some harmonic distortion to the signal passing through it, some (even harmonics) leave a quite pleasing sound, while others (odd harmonics) give the signal added sizzle and bite. Most give some secret combination of even and odd harmonics, and boutique plugins model them in a digital form to give audio an “analog” feel. They also add noise to the signal, characteristic of the noise generated from electrical circuits.

However! As I’ve said time and time again, podcasters should always be looking for ways to reduce instances of noise and distortion, because they disproportionately affect the high end and thus sound quite bad when you render them out at a low bitrate for podcasts.

And again, this isn’t a knock on these types of plugins. It’s simply that all plugins are tools, and boutique plugins are tools that are well suited for platinum selling records, things that will be recorded in studios and distributed in lossless CDs or high bitrate mp3s.

What podcasters need are transparent tools with streamlined controls and intuitive workflows. The biggest complaint that a lot of people find they have after buying boutique plugins is that they’re resource hogs, so something light on the CPU is nice too. And the good news is people haven’t been sleeping on audio design these last 30 years. From autogain to EQ matching to auto mixing and mastering plugins (looking at you, LANDR and Ozone), the barrier to great sounding audio is falling all the time. And if you peruse the Gearslutz forums, you’ll find that those mixing to much stricter standards than podcasts (think television, movies and radio), almost never use boutique plugins, because clarity, ease-of-use and consistency trumps “warmth” in these situations. And it should in your workflow as well.

So, if you’re looking to expand your arsenal this sale season, and you already have Reaper, I would suggest looking at the FabFilter line of plugins. They’re a company that has really focused on creating easy-to-use plugins that are amazingly flexible and provide all sorts of visual feedback that podcasters can immediately use. They aren’t cheap plugins, but even if you just picked up the Pro-Q , I guarantee you’ll find a use for it on every podcast you do.

But more than that, take some time to check out the free plugins made for Reaper specifically. There are hundreds of JSFX plugins that take advantage of tight integration with the DAW for low CPU usage and speedy rendering times. I use them all the time for sending out a processed signal to interviewees so that I sound better on their end. Getting live setups is tricky, but I’ve also used them to get Twitch channels to sound much better. And while they may not have the support of a big company behind them, oftentimes the creators of these plugins are happy to help you set them up properly or even make changes to better suit your workflow. Trileveler, our favourite compressor unit, is one such free JSFX plugin.

So! While it may be fun to say that you’re emulating an SSL console on your laptop, and tout that each channel has it’s own distinct characteristics, your money may be better spent on a  boring, dependable plugin that will help out when you inevitably get sent guest audio that is mangled in a way hitherto unknown to us. You know it’s going to happen.

PODCAST RECORDING The Best Microphone for Podcasts Riley Byrne, Owner, Podigy.co 14 December 2017 iTunes | Google Play | Stitcher So now that we’ve done software, let’s look at microphones. We touched on them briefly in our guide to podcast recording, but today we’re...

PODCAST EDITING Best Podcast Editing Software Riley Byrne, Owner, Podigy.co 06 December 2017 iTunes | Google Play | Stitcher If you’re familiar with Podigy, you probably know that we like Reaper. A whole lot. And if you’ve followed any of our guides, you know that...

Gates and How to Use Them

PODCAST EDITING Gating for Podcasts Riley Byrne, Owner, Podigy.co 02 November 2017 Gates serve a very specific purpose, and in the context of podcasting I often find that gates are unnecessary and can even be detrimental to the final product. Gates essentially only...

PODCAST RECORDING Bit Depth, Sample Rates and Buffer Size for Podcasts Riley Byrne, Owner, Podigy.co 20 October 2017 Today we’re going to walk through a few things that every podcaster has to decide upon before recording. In our Podcast Recording Guide, we outline...

PODCAST EDITING Master FX for Podcasts Riley Byrne, Owner, Podigy.co 15 September 2017 Google “audio mastering”, and you’ll undoubtedly come across dozens upon dozens of sites that call mastering “the dark art”  of production. To a large extent this is hyperbolic, but...

PODCAST EDITING Multiband Compressors for Podcasts Riley Byrne, Owner, Podigy.co 14 September 2017 Following up on our article about de-essers, today we look at multiband compressors. Both are frequency-specific (a la EQ), compressors, but whereas de-essers only...

PODCAST EDITING De-essing for Podcasts Riley Byrne, Owner, Podigy.co 08 September 2017 A de-esser is a podcaster’s best friend. It reduces the sibilance (words with “sss” or “shh” sounds, like ship, chip, sip, zip, or jump) of phrases so that they don’t jump out in...

PODCAST EDITING Compression for Podcasts Riley Byrne, Owner, Podigy.co 06 September 2017 Compressors are perhaps the most misunderstood and misused of all the tools podcasters have at their disposal to edit podcasts. They’ve been on every single episode of a big name...

PODCAST EDITING EQ for Podcasts Riley Byrne, Owner, Podigy.co 01 September 2017 An equalizer is a plugin we use in our digital audio workstation to modify the frequency response in our audio. It’s the most basic of all the building blocks to make our voice start...

Get in touch with Riley, our owner, anytime